After the final debate of the 2016 USA presidential race that was in Las Vegas at the Thomas and Mack Center in the University of Nevada last 19 of October, the Democratic Party candidate Hillary Clinton seems to have taken a decisive step towards the conquest of this Presidential election and seems to shut the door on the possibility of a comeback from her rival, the Republican Party candidate Donald Trump. Not only the politic analysts, that in the following days have plently commented the results of the live clash between the two, say that but also the polls give to the Secretary of State a big margin leading by 6.4 points the New York Tycoon and also – last but not least – bookmakers and bettors resemble to trust in the final win of the candidate of the Democratic Party. 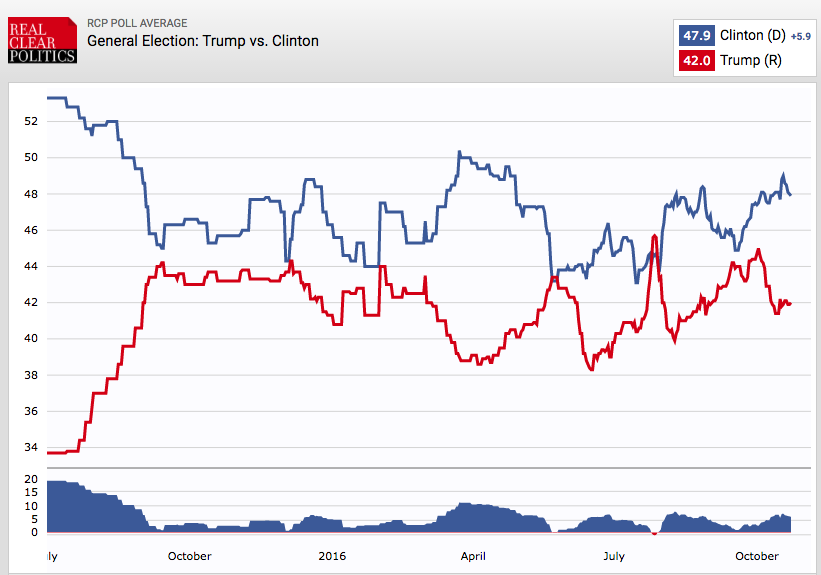 Often, as it has been shown in a previous article, more than polls and analysts, bookmakers’s odds are an excellent litmus test to assess the mood of the voters and their truest forecasts. After the last debate the feelings of the bettors have moved on Clinton victory. When just after the first clash between the two candidate the odds were balanced, giving a little advantage to the ex first lady (Clinton 1,44, Trump 2,30), today the gap has amply expanded and for example Bovada, one of the most important bookmakers trademark for the US market, gives Clinton triumph at 1,18 versus 4,50 for the victory of Trump. The day after the last debate – october 20th – Trump was at 4,75, a slightly filed down of his odd implying that some bettor still believe in his success or hope in an incredible turn of event (and this race for the Presidential election has already given several surprises).

After all bookmakers have again demonstrated their ability to predict events guessing a lot of words of the last presidential debate in a sort of vocabulary Bingo. Ladbrokes, another important trademark for the online betting market, right predicted several words in his Buzzword games as “Make America Great Again”(paid at 1,10), “Putin”, (paid at 1,20),”Pennsylvania”(paid at 1,30),  “Terrific”, “Reagan” and “Unbelievable” (all paid at 1,50), “Crooked” (paid at 3,00), “Give me a break” (paid at 3,00) and “Conspiracy Theories” (paid at 3,00) around 30% of the 31 words in the bets schedule, an interesting spectrum of the leitmotiv of this campaign which also includes words as Monica Lewinsky, Pneumonia and Washington Bubble. Even Bovada did something similar playing on the stereotypes and the keywords of this race to the White House. They proposed “Wikileaks” said under 3,5 or over 3,5 (it was told 1 time by Trump), “Tremendous” – typical expression of Trump’s vocabulary – under 8,5 or over 8,5 (Trump said this word 8 time) “America great again” under 2,5 or over 2,5 (it was told 3 time), “rig” or “rigged” under 4,5 over 4,5 (it was told 7 time), “Soros” or “George Soros” to be mentioned (Trump did it 2 times). On the same bookmaker internet page it could even bet on who had interrupted first his rival (Trump did it) and who would have had drink before (Clinton did it), a bizzarre presidential debate drinking game.

Now that the vote of November 8th is becoming more imminent and the projection of this presidential election seem to be track with Clinton in a big advantage on Trump, some analysts and even some betting site does not abandon the idea of possible “last minute twists”. This strange and electrifying head to head amidst allegations of fraud and rig elections, sexism, racism, disabling diseases, failed omicide attacks, russian interference, mail scandal and even denunciation of alleged body double does not stop to keep the audience with bated breath and PaddyPower keep to follow this “conspiracy line” proposing some strange bets and hypothesis as the postponement of the election day (odd at 12,00) or the resignation due to impeachment of one of the two candidate (Clinton odd at 21,00, Trump Odd at 17,00).

Meanwhile, just the same PaddyPower has already paid out € 1 million pounds in prizes for bettors who bet on Clinton: “If Trump win it would be the biggest political payout in bookmaking history and leave Paddy Power with some very expensive pie on its face” said Paddy Power blogger Josh Powell. But at the same time the experts of Williamhill have however denied their irish colleagues stating that after last debate 65% of all bets on the market have backed Trump to win the U.S. presidential election. Graham Sharpe Williamhill spokesman said: “It may be Because the race has reached a level now where people thought it might be worth taking a chance, or just as with the E.U. referendum, people just do not believe the opinion polls“. Something very similar happened with the run-up to Britain’s Brexit Referenfum: “It was the house that consistently Throughout the E.U. referendum campaign, some two-thirds of the money was gambled for Remain, but in terms of individual bets, it was around two-thirds for Leave. In straight bookmaking terms we have to be big Trump supporters as he currently Represents a six-figure loss in our overall market” said the same Sharpe. However William Hill stated that 71 per cent of the money so far staked is for Clinton election. But by number 65 per cent of the bets are for the New York tycoon, so the bookie has cut the odds on a Trump victory from 5,50 to 5,00 over the past two days in response to a surge in bets for the republican candidate (something very similar to the Bovada odds trend). Of course, the highest odd offered for the success of Trump induce bettors to place less money in his possible win and despite the positive trend of the last days, for the Republican candidate the possibilities to succeed to Obama are minimal (still at 20%, was 15% just the day after last debate).