Laure MANDEVILLE – The state of quasi-civil war, which currently prevails in the US, is it the result of the fact that the country is badly split alonf partisan lines, or is it due to the fear that the Trump phenomenon might mark the beginning of a change of regime?

Walter Russell MEAD. – As of now, answering such a questions is impossible. But the campaign was indeed very tough. Democrats mainght however find out that they have fewer reasons to be afraid of Trump than expected. His positions on trade treaties are closer to those of the Democrats than to those of the Republicans. And he has also attacked the traditional Republicans stand on the Obamacare issue, that he intends to replace with something else, rather that abolishing it altogether. Trump is a paradox. On one side his personality has increased the polarized, but many of his policies are quite close to the center of the political spectrum.

In a way, Trump is very similar to Daniel Moynihan, a very iconoclastic New York Democrat who associated a form of economic populism with cultural conservatism, and has been very strongly criticized for having said that the key problems of black urban ghettos came from the lack of traditional families and absentee fathers.

Since then, the Democratic establishment has gone in the opposite direction, and has become less populist in economic matters and very liberal from a cultural viewpoint, while the Republicans have become culturally more conservative, but have moved towards laissez-faire as far as the economy is concerned. This has created a political space for economic populism associated with populist moral values. That’s the place Trump has occupied.

He is the representative of the populists and nationalists in the Republican Party. The great show of the injuctions that he throws by tweets to the big companies to demand them to invest in the United States is very skillful, because he puts the people on his side. But government action will probably be more pragmatic. There are many businessmen comimg from Goldman Sachs in his Adminidtration; This is usually not the sign that things will lean towards populism.

Laure MANDEVILLE – Isn’t that extraordinary that Trump has won against everybody else?

Walter Russel MEAD – One of the biggest mistakes was to underestimate Trump. This man has defeated the two most powerful US political families, the Clinton and the Bush, as well as the entire establishment, even if he has spent much less money than his opponents. He did this all by himself, in spite of the almost universal detestation of the media, going against the established wisdom , because he had the intuition of the issues that would appeal to the population. Those who believe him stupid have not paid attention to what has just happened! And since he is capable of blurring the tracks on all subjects, he has much freer hands on domestic as well as on international issues. There is a lot of Sun Tzu in Trump, the art of masytering surprise. His problem will probably be that one cannot start all over again from scratch every day and on every issue. Moreover, that’s a method that will gain him a lot of enemies. 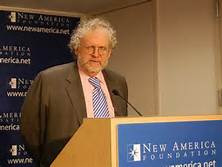 Walter Russell Mead is Professor of Foreign Affairs
at Bard College, and previously at Yale.
He is the Editor of “The American Interest”

The media are really devoted to destroying him. The bureaucracy sees him as an enemy, not only in the intelligence agencies, but also in the environment agency, and in the State Department. It is to be expected that those bureaucrats who hate him will leak news to the press and sabotage his initiatives as only a creative and angry bureaucracy is capable of doing.

No doubt, the way Trump was elected – against the system – will complicate his task of governing. Many really see Trump as an unprincipled criminal, who will eventually do something so criminal that will enable them to impeach him. But I think his most fierce opponents are those who have been poisoned by their own apocalyptic rhetoric. Trump has operated in the construction industry, a very hard world, and this explains those ways that shock the elite so much. That said, Trump is going to have to be wiser now, he needs different qualities to govern. His campaign assets will certainly help, but a president must also exercise self-control. Will he be able to do it?

In my opinion, the real Donald Trump is a much more formidable and complex figure than the cartoon clown he has willingly put forward. But we do not know if he has what it takes to be president.

Laure MANDEVILLE – Are you worried at all about Trump’s possible temptation to withdraw from traditional alliances?

Walter Russel MEAD – No. If you look at the people he has chosen, they are soldiers who have a real understanding of the value of these alliances. We must not hurry to judge … Moreover, his iconoclastic approach aims to pinpoint the problems. When he criticizes the weakness of the European Union, he is just pointing out the fact that the King is naked…..

This interview has appeared in French in “Le Figaro” on January 22nd, 2017

The translation from French is provisional.